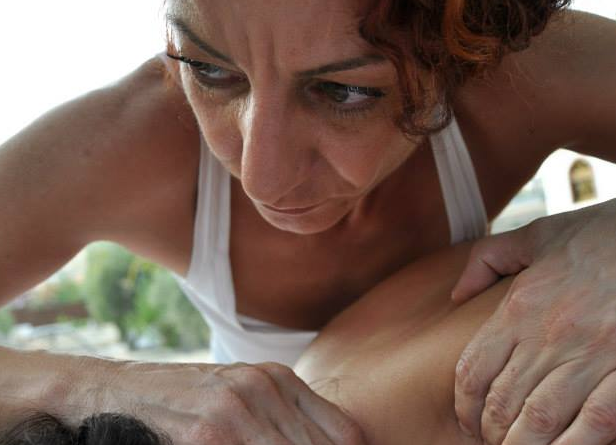 Panayiota was born in Jersey, Channel Islands, in 1967. She has signed up for the World Championship in Massage 2019 in Copenhagen. Her family was originally from the village of Rizokarpazo in Cyprus. In 1983, her family moved back to Cyprus where she attended college for a secretarial degree and soon after married and divorced at a very young age. In 1992, she taught herself massage then later took professional massage and reflexology courses that led her to further studies of alternative therapies. However, her main passion and focus remained with massage which, after many intense years of practice, prompted her to create her own method: The Anatripsis Therapy.

Panayiota began her massage début as an ‘A-Rated’ Masseuse at the Four Seasons Hotel, Limassol, where she soon earned the honour of advancing to Massage Trainer and Supervisor. She later went on to successfully open her own center, ‘Ancient Wisdom’, where she organized various self-development courses and ran a retail shop selling healing products. She also organized massage marathon events whereby she performed massage for over six continuous hours to raise money for charity.

Becoming aware of a consequent high demand for Anatripsis, Panayiota then closed the center, and continued to practice even more intensely and to teach her method. She wrote two books on Anatripsis: an academic edition and this public edition. Since launching her Anatripsis technique, she has been profiled in numerous newspapers and magazines, has talked on radio and frequently demonstrated Anatripsis on television, receiving a phenomenal amount of response from viewers.

She now lives in Cyprus with her two children and practices in a medical clinic in Nicosia and Limassol. Her life experiences, her passion and dedication to the field of massage have brought her to a greater understanding towards the philosophy of emotions and the ‘energy anatomy’ of the human body. She helped many who required surgery and released pain for people who still suffered after surgery. She has had successful results with those suffering from depression, migraines and many other painful symptoms. She now shares this vital knowledge through her workshops.

Anatripsis is the first level of massage therapies that Panayiota has devised. Her aim being to bring healing back to its traditional natural form and to unite medical and alternative methods into a single comprehensive therapy — and to teach people to heal the selves as well as others.

IMA look forward watching her skills at the World Championship in Massage 2019 in Copenhagen.